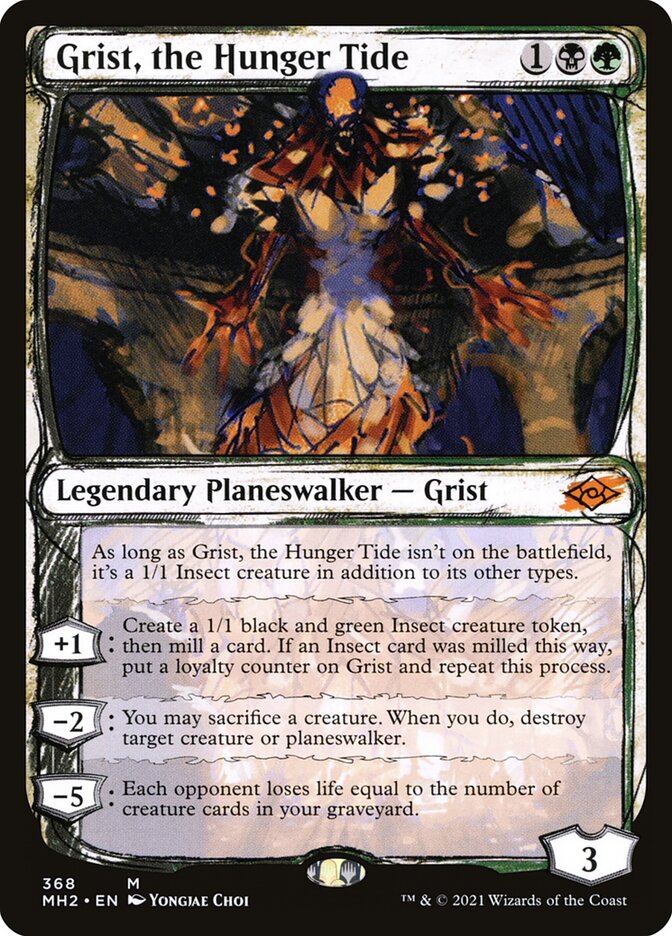 As long as Grist, the Hunger Tide isn't on the battlefield, it's a 1/1 Insect creature in addition to its other types.
+1: Create a 1/1 black and green Insect creature token, then mill a card. If an Insect card was milled this way, put a loyalty counter on Grist and repeat this process.
-2: You may sacrifice a creature. When you do, destroy target creature or planeswalker.
-5: Each opponent loses life equal to the number of creature cards in your graveyard.

Rules and information for Grist, the Hunger Tide

Because Grist, the Hunger Tide is a legendary creature while it’s not on the battlefield, it can be your commander. For more info, please see https://twitter.com/SheldonMenery/status/1397234642437263363

Grist, the Hunger Tide can be your commander as its first ability works before the game begins during deck construction.

If Grist is no longer on the battlefield as its first loyalty ability resolves, you will still create a 1/1 black and green Insect creature token and mill a card. If an Insect card is milled this way, you won’t be able to put a loyalty counter on Grist, but you will still repeat the process. More mill for the Grist, as it were.

Grist’s second loyalty ability doesn’t require a target. If you choose to sacrifice a creature as it resolves, the reflexive triggered ability triggers and you’ll choose a target creature or planeswalker to destroy. This will happen even if Grist isn’t on the battlefield when the loyalty ability resolves.