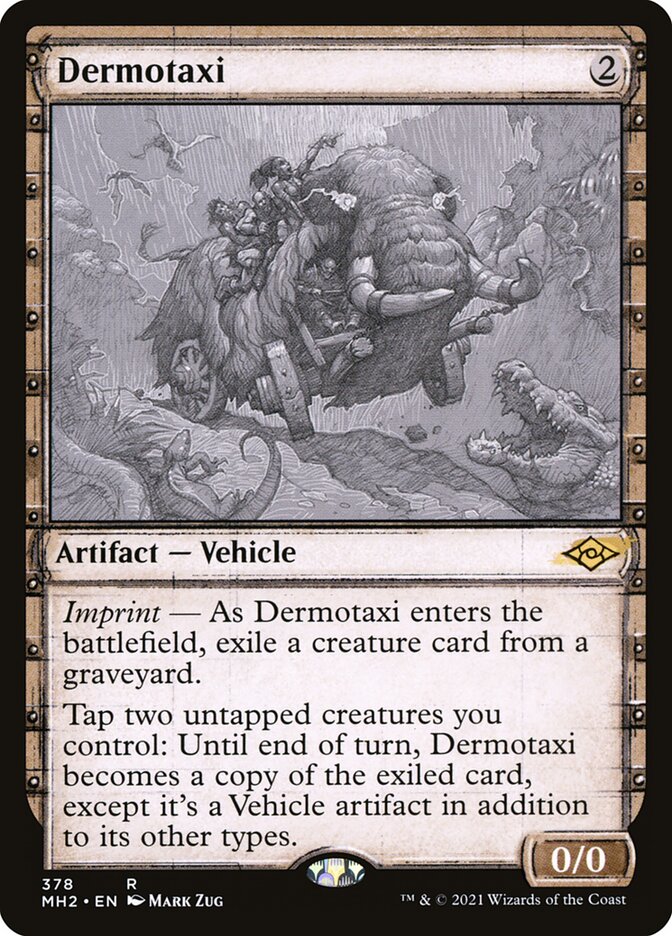 Imprint — As Dermotaxi enters the battlefield, exile a creature card from a graveyard. Tap two untapped creatures you control: Until end of turn, Dermotaxi becomes a copy of the exiled card, except it's a Vehicle artifact in addition to its other types.

Rules and information for Dermotaxi

The choice of what card is exiled is a replacement effect, not a triggered ability. Players can’t respond to the card being exiled.

The imprint ability is linked to the activated ability that makes Dermotaxi a creature. This means that the second ability refers only to the card exiled by the first, even if it becomes a copy of something that later exiles other cards.

If you activate the ability, but there’s no exiled card to reference (perhaps because there wasn’t one in any graveyard to imprint), the ability does nothing. Dermotaxi won’t become a copy of anything.

Dermotaxi does not have a crew ability. Activating the ability to have it become a copy of the exiled card doesn’t count as crewing a Vehicle. If a creature you tap to activate the ability has a triggered ability that triggers whenever it crews a Vehicle (such as that of Gearshift Ace), that ability won’t trigger.